A hole in the sky 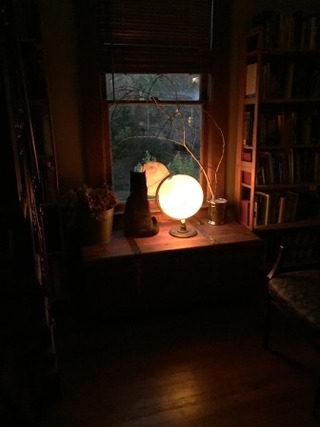 Portal books have a special kind of magic. The idea that anything, a wardrobe for instance, or a rabbit hole, may be a passage to another world opening onto something far other than old clothes or rabbits, is a notion hard to resist. Once, I made my own. I could never go through it, but I could look, and there were the stars of another universe, just looking back at me.

When my son left home for college, I seized the opportunity to reclaim his bedroom, the original "back parlor" of our old house, and turn it into the dining room. After excavating the strata left behind — deflated basketballs, lone socks, every piece of paper he had ever been handed since the age of eight — all cemented together with various forms of nameless gunk, it was fairly clear that the gunk might have been all that was holding the room up.

Something had to be done about the ancient horsehair plaster beginning to buckle behind multiple layers of old paper on walls and ceiling. Preferably something that did not involve stripping the plaster off down to the lath and replastering. More paper sounded like just the ticket, and just about what we could afford. So we had the walls covered with "faux old Italian courtyard wall" in a variegated pale yellow that disguised the various bulges in their aged contours; and the ceiling repapered to hold back the crumbling drifts that seeped from tears in the previous paper. The woodwork was repainted off-white, the floor refinished, and the ceiling paper spackled over with a pale stucco-like compound that looked beautiful with the new walls. Not period by any means, but very arty.

That was when the toilet in the upstairs bathroom overflowed, and its contents poured down through the new ceiling, leaving a patch of stained paper surrounded by the hanging shreds of the new stucco finish. It looked as if someone had grabbed the ceiling in their fist and yanked a chunk out of it. I half expected to see sky through it.

So why not? We were out of money. I painted the exposed ceiling a dark blue-black and dotted it with stars. The effect was startling, as if you really were looking clear up into the sky. Or maybe into another universe, given that there ought to be a second story between this ceiling and the usual sky.

I was still congratulating myself on the idea when a window air conditioner upstairs iced up, and then thawed unnoticed, producing a second hole in the ceiling. I decided that more stars would give the general effect of having been bombed in some mad military error, but that when you have a good idea you should stick with it. So in the second hole I painted a pale blue sky dotted with puffy white clouds. After that, I occasionally thought I saw birds fly though it out of the corner of my eye, and our ginger cat, who was crazy anyway, used to sit on top of the radiator cover and watch it. It may have been mice in the ceiling, but I always felt as if, if only I was small enough to crawl through, there would be something besides floorboards on the other side. Tiny space stations maybe, or comets.

We have since sold that house but I hope that while it is night on the west side of its tiny dining room planet, it is still day in the east.

It takes a great sense of humor to get through this kind of awfulness.
I have to confess that I chuckled out loud. BRAVO, Amanda.