The Workers in Words 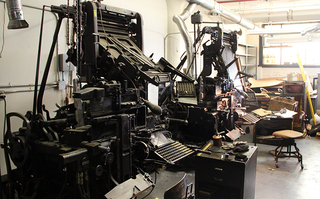 Today’s mystery question: Who is Etaoin Shrdlu?
If you know without googling it, chances are you can read upside down and backwards.

I worked for a newspaper years ago in the days of hot type, cast from molten lead on the Linotype, and spent a lot of time in the backshop staring at mirror-image copy in the forms from which the paper was printed. I had to read it upside down as well, because the backshop guy was always standing at the bottom of the page asking why he couldn’t just cut the last paragraph of the flippin’ story, which was too long – again. It took delicate negotiation to convince him to take out a less vital sentence in the middle of the third paragraph instead.

The backshop smelled like hot lead (and cigars) and the linotype machines fascinated me. They were monstrous and noisy, full of clanking wheels and levers and mysterious gears. They spat out slugs of metal type, an entire line at a time, properly spaced for the column width. etaoin shrdlu was what you got if you ran your fingers down the first two rows of lowercase keys, and often appeared as a placeholder for type still to be set, or as a test line when the machine was fired up. Occasionally it got left in by mistake, giving the phrase a certain mythic quality, like a reappearing ghost. It wouldn’t have surprised me if there were ghosts in the backshop anyway, with so many accounts of political skullduggery, double murders, and body counts from Vietnam, cast in hot lead, here for one edition, melted down tomorrow for another gruesome tale.

The men who ran them were inclined to call me Hon and tell me dirty jokes, and occasionally came to work drunk, but they knew their craft. They were, to paraphrase Leonard Cohen, the workers in words, as much as I was, and with a lot more experience. I think of those machines, and of peering over a form at lead type, now as I effortlessly move paragraphs around on a Word document or change a character’s name with global search and replace. You had to know what you wanted to say with those machines because revision was not allowed for anything other than misspellings or mislaid facts.
Goodnight, Mr. Shrdlu. I learned a lot from you. Read More
1 Comments

Great post. It brings back a lot of memories. Even though I never set type, my father was partners with an old friend in a printing business in downtown Richmond. Unless his partner's son, who inherited "Old Dominion Press," moved the company, the building is now amidst the spiffy warehouse district, among restaurants, shops and art galleries.

In the 50s, they had the old machines. I loved the smell, too! My brothers and I hung out with our favorite employees and machines. I also loved to play with the calculator on the secretary's desk -- the first sign that I'd wind up in the mortgage business for 10 years? Perhaps. Had I been a boy, I might have gone into Daddy's business. My brothers had no interest.

Before the upgrade of the neighborhood, it smelled strongly of tobacco. Trucks full of chickens left feathers flying every which-a-way.

Thanks for bringing back these memories.