The Day of the Dead

Tags: Day of the Dead, October 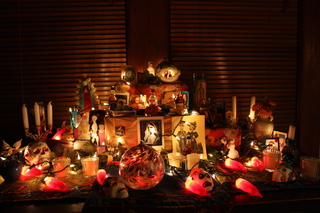 The Day of the Dead is nearly here. Ordinarily I would be getting out the decorations, bringing Catrina and El Jefe up from the cellar and dressing them in their party clothes. This year, no. No party and less incentive to decorate. The decorations are just fluff anyway; the heart of the Day of the Dead is the ofrenda, the altar with pictures of our lost loved ones, and little gifts for them to enjoy: gin and poker chips for my father, chocolate and a china dog for my mother, brandy for my father-in-law, and his slide rule from the corner cabinet in the living room.

There is something about late October that pulls the curtains apart and leaves us staring into mystery, more than a little afraid. The leaves whirl around our heads in a mindless dance, carried on a wind that electrifies the cats' fur so that they also run a little mad. No wonder so many different cultures marked this cross-quarter day, midway between the fall equinox and the winter solstice, as a hinge point in the year, when anything might visit from the other side.

The Day of the Dead has its origins among the Aztecs. It has some things in common with Celtic Samhain, that other end-of-October cross-quarter-day marker long ago coopted by the church to serve Christianity instead of the old gods. As on Samhain (pronounced sow-in) the veils between the worlds are thought to be thin and permeable, so that spirits may come drifting on the late October winds. At Samhain no one wants to meet them, and doors are closed and fires lit against anything riding that storm. But the Day of the Dead welcomes returning souls, says to them, "Come in, have a drink, smoke a cigar, remember how we still love you. You are our own. Who are you that we should fear you?"

So we'll set up the ofrenda, and maybe we'll put a picture of last year's party on it too, just to stay in touch. I've always thought of this party as a living entity, a hive spirit composed of the rotating cast of friends who come each year, bringing marigolds and bottles of wine and pictures of their own for remembrance. Then we'll stand on the front porch and admire the full moon and pay our respects to whatever comes to call.

Coming to your annual celebration over several years, it slowly sank in and became part of my realization of the mysteries of Death, my healthy acceptance, and the incorporation of the love that remains. Thank you.

It's nice to pause and remember those we've lost and missed.

I think we'll set up an ofrenda this year too, given that the losses have been recent and a little painful. I'm sorry that I can't improvise a costume this year, but we can't pretend that we're all so close that we wont' pose a possibility to each other. As they say, next year in Jerusalem.