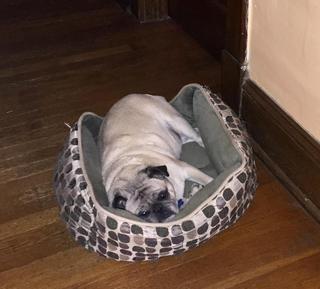 In the aftermath of the Day of the Dead this weird warm November, all the dogs of my lifetime come drifting across my memories, perhaps lured by the heartening news that there will be dogs in the White House again. A friend has just adopted a dog, Sabina Beans, and I have been following her adventures on Facebook with joy because Sabina Beans is so clearly happy to be this friend's dog.

When something decides to love you, it's not a gift you can give back.

Percy was a rescue. We acquired him when our golden retriever died and we thought the pug, Gilly, would be lonesome with no one to boss around. He was three years old, had a mournful expression and a Hapsburg jaw and had never been neutered until the rescue people got him. He also had whipworms.

We took Gilly with us to pick him up in Virginia Beach, knowing that if we left her for three days and came home with another pug she would lose it entirely and pee on everything we owned. The hotel allowed "one small dog" so after we collected Percy we had to take them out for walks separately, on the theory that the desk clerks probably couldn't tell one pug from another. He seemed to like us and Gilly seemed to think that she had picked him out.

We brought him home, treated the whipworms, and began to discover that he had certain. . .peculiarities. He had clearly been weaned too soon and had a habit of sucking on the bedclothes, leaving rings of small tooth holes that eventually enlarged into one big one so that all our quilts looked as if giant moths had been at them.

Mainly he had a thing about people coming in the front door. Someone sometime had clearly come through a front door and done something bad, and he wasn't having it again. His strongest reaction was to men, but he would bite women's ankles as well when he felt like it. He would also bite them when they left, for good measure. He was better with men who were dog people, and he was fine with my husband's brother for some reason. We also discovered that if there was a large party (we held several gatherings every summer for the students and faculty in my graduate program) we could shut him upstairs until there were ten people or so in the house, and then he would be fine since there were so many he didn't know who to bite. And most of the students in my children's literature program were female, so that helped, as did liberal applications of dog biscuits. He did have a tendency to tree the male students until someone rescued them. When he bit an illustration professor we had to quit letting him socialize under any circumstances that might get me fired, or sued. So after that we would have to shut him upstairs, where he howled and moaned and shrieked and threw himself against the door.

When we had had him for about a year, our son moved back home. For the first month, Percy followed him around barking. Our bedrooms were opposite each other across the hall and at night any time that Felix got up, Percy would hurl himself off our bed and bark at him some more. This went on for about a month until we were all nuts, and then his magnetic poles reversed or something. One day Percy decided he was in love with Felix instead. He followed him everywhere, a one-pug motorcade, demanded to sleep in his bed (he moaned and whined outside the door if Felix tried not letting him in) and now lost it completely every time Felix left the house. He lay down by the front door alternately whining and producing a cross between a moan and a bellow that sounded like a lovelorn foghorn. If Felix left in the company of a female, Percy was particularly unstrung.

Just having Felix on the other side of any door that he couldn't go through was too much for Percy. He would sit outside the bathroom door and moan and fuss while Felix shaved or took a bath or anything else. I made it worse one night while Felix was bathing and Percy was gibbering outside the door and I was trying to sleep. I leapt out of bed, flung the bathroom door open, screamed "I can't stand this anymore!" and shoved Percy through it. Percy was a dog with whom it didn't take much to set a precedent. After that Felix had to keep a dog bed in the bathroom and take Percy with him, accompanied by muttering in my direction about whose fault that was.

Felix had not wanted a dog, and he particularly had not wanted Percy, who bit all his friends and behaved like a helicopter parent when he went out. But it's a funny thing about what happens when something loves you. It's hard not to love it back. When a dog insists on sleeping with you, and will go anywhere with you even if he knows it's to the vet, and clearly thinks you are his personal god, then something happens.  When he says, "I'm your dog," he is.

So Percy was Felix's dog, even if he belonged to us, sleeping in his laundry and on his bed, riding shotgun in the car to the Dairy Queen that Felix knew gave free dog treats, switching finally from walks to pottering around the dog park as he developed arthritis, Felix's self-selected dog  for the rest of his life, a dog who found love in middle age and stuck with it.

I'm amazed it took Percy that long to wear Felix down!