When I Was a Dog 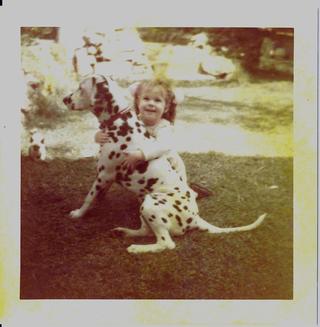 Last week we met our creative writing tutorial students, always a dicey proposition: will they decide I am nuts, incompetent, otherwise peculiar? I never ask if they will be normal. They never are; writers just aren’t. And as always they prove to be a charming bunch, frighteningly talented, and seem to find me acceptable.

We began the evening with introductions: all grad students and tutorial faculty were instructed to tell one thing about themselves that no one knew. Well, that’s an invitation to...something. I cast about for something not too intimate, not likely to get anyone arrested, not too braggy. Free association led to the student from last summer whose daughter claimed to have been a rabbit, and then I remembered that I was once a dog.

I was four or thereabouts and my role model was our Dalmatian. I had my own collar, and a tail made from a ribbon. I had a leash too, which I insisted on wearing when my mother took us shopping. That got her yelled at in public a lot, but she was an indulgent mother and just smiled sweetly at the horrified shoppers. “She likes being a dog,” she said in that disarming Birmingham accent. I would pant happily and they would edge away.

I don’t remember how long I was a dog, but I do remember that there was enormous satisfaction in the companionship of our Dalmatian. I would nap on the living room rug curled against his warm flank, listening to his breath rise and fall. I was an only child and I think I sensed the need of a pack.

It wasn’t until I got to college and fell in with the students in my first creative writing class that I found a pack again. At Opening Convocation last week, the president quoted Oscar Wilde in her address to the newest students: “Be yourself,” Wilde is supposed to have said. “Everyone else is taken.” The academic in me can’t keep from noting that he probably didn’t say that, but it’s a fine sentiment anyway, if difficult to do. I think that until I was around forty, the strongest sense of being myself that I had was when I was a dog, except for those hours in writing workshop when we could come at it sideways, be ourselves by being someone else. To this day my writer friends are all a little mad. I have one who says her spirit animal is a buzzard. When we write we are allowed to be dogs and we will wear our tails proudly. Read More
2 Comments

I love this entry! You say that you WERE a dog. Are you not one still, even when you are not writing? "Once a dog, always a dog," I always say. In fact, I named my child after a wonderful old dog I once had. Ryder was her name - an old rescued Golden, and she lives on through my son, who is quite proud of his name sake. Hmmm. Maybe all of this dog that we possess within us and around us is characteristic of our pedigree. Cheers. :)