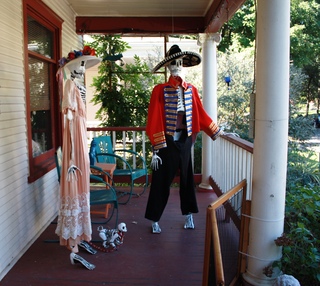 Since we are transplanted Southern Californians, we miss the Day of the Dead and so we have an annual party to import our favorite holiday. For some reason I always manage to write a lot during the mad preparations for it. I have found that nobody has as many stories as the dead do.

In Mexico and much of the Southwest November 1 and 2 are celebrated as El Dia de Los Muertos, the Day of the Dead. They coincide with All Saints Day and All Souls Day of the Christian calendar, but the tradition is older, with its origins among the Aztecs. On those turning-of-the-year days, when the borders between the worlds are thin, those who have gone through the door to the next world may come back to visit. The children, los angelitos, arrive first, on November 1, followed by the adults. Graveyards are spruced up and houses are decorated with skeleton figures and sugar skulls to remind us that death is just another world. Families make altars where they place the things that the departed loved. Candy for los angelitos, cigars and whiskey for the old men. I find myself shopping for them in October the way I shop for the living in December.

I like to think they appreciate it. Certainly they tell me stories. “Remember the gardener who was so good with roses,” they whisper in my ear. “Remember when he shot his wife’s back-door man and all the rose growers in town put the arm on the judge?” And I do. I remember as if I was there. “Remember Cousin Willetta?” they murmur, and I recall the family lottery of who-would-drive-Willetta, because Willetta didn’t drive, and listen to her complain for hours that no one could fit a shoe properly these days because she bought fives when she needed sixes. She was a sod widow and her sister was a grass widow and they lived together with six cats and made dreadful jam. My husband’s grandfather is there too, handsome and feckless, who sang for eight hours on a bet and never repeated a song. His wife stumps along behind him, a woman not to be trifled with, so tough that when he died, everyone called her Pa. They all come to visit, the newly lost a comfort to think of again, the distant ones just a nod through the wavy glass of the front window, their hands full of history.

I loved this, but I need to know what a sod widow and a grass widow are.

A sod widow is an actual widow -- he's under the sod. A grass widow is a divorcee. Old terms, gleaned from my grandmother.

I think they called her "Pa" before he died. He wasn't around much anyway, being an itinerant picker. He only showed up long enough to get "Pa" pregnant and, apparently, sing. 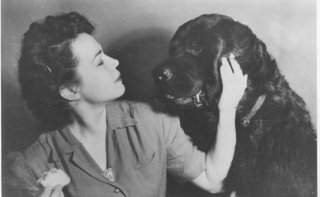