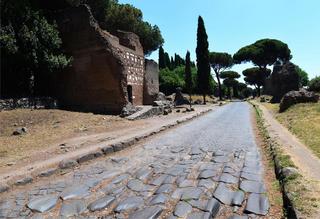 I've been thinking lately that one of the ongoing problems for a historical novelist is putting twenty-first-century thoughts in a first-century head.

The temptation is strong. After all, we want these people to seem sympathetic to a twenty-first century reader. And the reader wants them to be good people too. Thus the very bad review I once got on a romance website where a reader complained that Aphrodite kept sleeping with men who weren't her husband. But when a first-century hero lectures Augustus on abolishing arena games, you know that someone hasn't done their research.

The treatment of women and the practice of slavery are particularly thorny. Your first-century hero isn't going to be a feminist. And your first-century heroine is unlikely to be either. Does he beat his wife? No? Good. A lot of men did, and he probably disapproves but it won't occur to him to give women equal legal standing. Does the beaten wife put up with it? She probably has to, but she may well hate his guts. Some things aren't different. But she's not launching a crusade for women's rights. She may be wondering how to poison him.

Those arena games entertained the mob and the aristocracy alike. Only Seneca came close to condemning them and that only because they damaged a man's inner fiber, not because of their intrinsic cruelty. I've had to tread lightly with those, mostly for my own stomach's sake. I imagine there were many who didn't care for them, but none who suggested abolishing them. They may be an order of magnitude higher than dog fights and cockfights, if you count animals souls as always lesser, but certainly on a par with the gleeful, hungry crowds who watched lynchings not all that long ago, and would do it again if given the chance. The games trouble me the most of the things that fall into the Acceptable-then-but-now-oh-my-god category, more than slavery or the status of women.

But it is the issue of slavery that seems to be the hardest for modern readers, and you can't write about the ancient world and ignore it. A great part of the economy ran on slaves in that pre-industrial empire. Because the subject is so fraught with anger and guilt and willful ignorance in our current world, ancient world slavery is the subject of recurring comment wars on every social media platform where someone mentions it. An argument between an archaeologist and a poster who wanted to insist that an iron collar from a burial site was for a dog and not a slave went on for days. Yet ancient world slavery was a different institution from the horrors of American slavery. Most importantly to my mind, it was not race-based. You could be born of a slave mother, or become a slave because you were captured in a war, or fell into debt, or were sold by your parents. Not a happy life generally, but not dependent on your skin color. Slaves might be highly educated, the better to serve their masters.  Many tutors, secretaries, accountants and so on were slaves. Furthermore, a slave could buy their freedom, and many did, and numerous freedmen became wealthy and powerful. Your first-century hero is going to own slaves unless he is one himself, if he has any social standing and means at all. He is not going to ponder the injustice of slavery in general, although he may free some of his slaves for services rendered and dislike the master who mistreats his own.

Writing about the past requires an honesty, I think, that precludes trying to give people who lived two thousand years ago the sensibilities of the progressive first world of 2020. The best you can do is to realize that for your characters, the first century is what they have to work with. It is what they do with it that matters.

Yes! Thanks for this. We gotta lie truly....

- Graham Allman (the surname is a modernisation of Alamani one of the Saxon tribes.