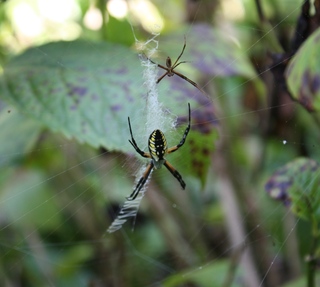 With the first frost last Thursday night, the spiders are gone. I can’t say it distresses me when cutting back the browning stalks of the black-eyed-Susan, not to come face to face with one of the big black and yellow orb weavers that put out their nets for lunch just at a kneeling gardener’s eye level. But I miss their busyness in the autumn Spider Moon when they are doing their part in the insect ecosystem, the Great Chain of Bugness, even if I scope out the coneflowers and the daylily stalks before I wade in there. One took up housekeeping in the lotus this year, stringing her web between the stalks. I fear that that’s the mister behind her in the web, victim of a fatal romance.
I still see the bumblebees but they are fewer and fewer. The agastache that they love to bumble in has died back. When the Mexican sage has gone, they will too.
The milkweed bugs have left too, to wherever they go. I don’t know where they come from either, they just show up in late summer, a crust of tiny yellow dots on the milkweed and butterfly weed, progressing to orange and black nymphs and then handsome winged fellows.
Earlier in the year there was a praying mantis on the lotus. She swiveled her head at me, clearly wondering if I was edible. Too big, she decided, and moved on.
A few crickets are holding on in the basement but the garden feels empty, so many bug lives wound up. Sometimes after a frost I find small crisp bodies. I have to remind myself that a winter garden isn’t dead. Somewhere there are eggs, next year’s bugs in waiting.