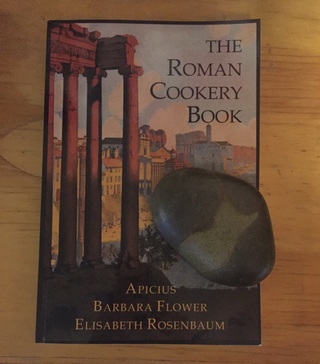 In the course of researching any past culture and its ways one occasionally comes on something that begs for experimentation. Cooking for instance, which tends to be largely experimentation anyway when I get my hands on it.

Wanting to get the menu of various fictional dinners right, and to know what one would eat for breakfast, I acquired a translation of the classic work on Roman food, the first-century recipes of Apicius, by two mid-twentieth century kitchen scholars who actually made most of the dishes before publishing their text.

Billed as "A Critical Translation of The Art of Cooking by Apicius for Use in the Study and the Kitchen," like many ancient texts this one derives only from copies of copies, preserved in two ninth-century versions of a fifth-century manuscript. Large chunks of it seem to be additions by the fifth-century editor, so there are the inevitable difficulties. One term, for instance, can mean either artichokes or mussels, which is going to make a difference in your recipe right there.

And there is the issue of measurement, because there isn't any, mainly. A sauce for boiled ostrich (should you be serving one) lists only the ingredients for the sauce but no quantities or instructions, other than to boil that too and pour it over the ostrich.

Naturally I want to make something out of this book, and am fortunate enough to have two mad friends who want to do so as well. When we can cook together again, I'm thinking of Chicken in the Numidian Way with the Spiced Wine Surprise.