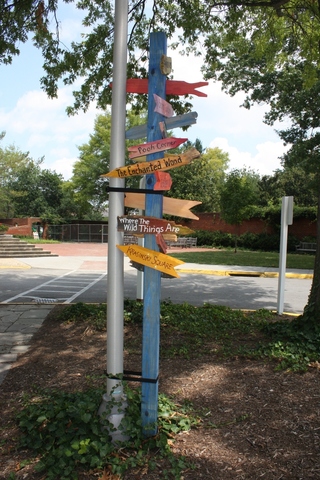 A fine weekend in Birmingham with the Southern Breeze SCBWI for their Writing and Illustrating for Kids conference.

My mother was from Birmingham and my childhood summers were spent there with my mom, grandparents, and a large cast of aunts, uncles, and cousins, acquiring a Southern accent and a loathing for grits. My grandmother’s front lawn had tree wells, rock-lined columns surrounding the tall pines that had been there when the house was built and the ground leveled. We regularly lost badminton birds down them and had to crawl gingerly down after them, batting spiders from our hair. We slept in one of the two spare bedrooms (my mother and my aunt in the other) in an assortment of cots, a double bed, and a youth bed that still had rails on it, arguing about who got to sleep next to the fan (no air conditioning) and listening to the squirrels bowl acorns up and down the attic floor above us. One summer we packed up the Arkansas cousins and the Mobile cousins and went to Panama City for a week, probably just to get us all out of my grandmother’s hair. My cousin Lucy, the eldest of the lot, was given the job of letting us get in her hair instead. As a teenager I drove my grandmother in her ancient black and aqua Plymouth from her house to the grocery store in English Village every day and was rewarded with limeade from the drugstore.

I wish I had had the time to drive by and see that house again. I only spent one month a year there, but I remember it as well as the house I grew up in.

This trip to Birmingham, I gave a workshop on “Is an MFA for You?” and obviously hope it is. Four of our Hollins Children’s Literature graduates were conference participants, including the SCBWI regional advisor, the redoubtable Claudia Pearson, who not only did a lot of the conference organizing (and introduced me to shopgoodwill.com, to my husband’s dismay) but hosted the faculty and volunteers at her house for dinner afterward, and sent me on the road with coffee in the morning.

If you want to write for children or teens, there is no more supportive organization of writers. You’ll find them at scbwi.org and be very glad you did. And for anyone contemplating an MFA in writing for children, the text of my talk is here:

Is an MFA Program for You?

Well, obviously I wouldn’t be here if I didn’t think MFA programs were valuable, since I direct one in writing for children and young adults. And co-direct another in writing and illustrating children’s books. They can be enormously valuable in honing your craft. And they aren’t for everyone.

So what are the pluses?
You get a community of likeminded students and faculty who love and respect children’s books and writing for children. None of them will ask you when you are going to write a “real book” for adults, or do “real” art. Those relationships will last.

You get to study with faculty who are themselves successful writers and illustrators. You will learn a lot from them, particularly the thing that we all need the most, which is to revise. The first and hardest lesson a writer learns is that her work is not golden on the first draft. An MFA program won’t validate you, won’t tell you that you are the greatest children’s writer since Margaret Wise Brown. An MFA program will tell you that you aren’t, but you could be.
You will study the best works of children’s literature and the best illustration with the goal of learning how they did that.

You will also (in most programs) study the best of children’s literature and children’s book illustration from a scholarly point of view, and you will learn a lot about your own craft from that too.

You will get motivation – there is nothing like having paid for four credits to give you an incentive to do the work. But there’s also nothing like having the other students and the professor in your tutorial tell you that you are on the right track, that this novel is going somewhere now, that you must finish it.

You will get a terminal degree that will allow you to teach at the college level, if you get a few publications under your belt along with the MFA.

So what are the minuses. Why isn’t everybody rushing to get an MFA right now?

Well, there’s that money thing. Tuition is expensive, particularly if you have to come up with the entire degree’s worth of tuition at once.

There’s the life disruption thing. You have to stop whatever else you are doing – making a living, for instance, or having children – to go to school.

And you have to peel out the time to do it.

And one final issue – this one isn’t really a minus, so much as a caveat. In an MFA program you will be pushed to revise, to try things you haven’t done before, to shake up your writing or your media and style. An MFA program isn’t the place to write yet another draft of that 500-page fantasy novel you’ve been working on since high school. It’s the place to put it down and try something new, and maybe surprise yourself.

On the other hand, if you do that, you will come out of an MFA program with something solid, something publishable. It may not get published – we all know this business is a maddening crapshoot – but it will be good enough to.

So if that sounds promising, like something you would want to do, what’s the best way to jump at it? There are three formats, so to speak, that most MFA programs fall into:

Full-time, year-round programs that usually let you finish up in one to two years.

Low residency programs that bring you to campus for an intensive week or 10 days and then send you home to swap work with your faculty mentors by email. How fast you work will determine how quickly you can complete those programs.

And lastly, summer programs, which is Hollins’ model. We bring you to campus for a compacted six-week term, you complete your coursework on campus, and are finished with those courses when you leave. We allow a certain number of independent studies and online classes between summers, so our writing MFA ranges from five summers if you take all of your courses on campus, to three summers if you complete four courses in between. Our combined MFA in writing and illustrating can be completed in four summers if you do some coursework in between. (Full disclosure on that: this one is still in the approval process but we expect to launch it next summer.)

These three MFA models also offer different angles on paying for it all. A year-round program will be paid for in whole-semester bites. The low residency and compacted summer residency let you spread that out more and pay as you take each course. All offer federal student aid, and grant money from the institution is often available.

I can’t tell you which MFA program you should go to. We all have our strengths. I do wish I knew what program the poet Ellery Akers went to because I’d tell you not to go there. In her poem in the September issue of The Sun she speaks of a writing teacher who wrote “crap” at the bottom of her first poem. Don’t go anywhere where a teacher will write “crap” on your work. Go where the teachers will show you why it isn’t working and help you find a way to make it work. The idea that writers need to be tough enough to take abuse or they won’t succeed – don’t deserve to succeed – is old and outmoded and was dangerous to start with. I can’t bear the thought of how many good writers stopped writing because someone wrote “crap” on their poem instead of actually teaching them. So if you find out where that is, don’t go there. Don’t go where the faculty will try to teach you to write like the faculty, either. Go where they will teach you to write like yourself, only better.

Finally, I was asked to recommend books on writing that I like, so here three:

One is Steering the Craft by Ursula K. Le Guin, which is one of the best craft books I have ever encountered just for polishing up your style, your syntax, your ability to show instead of telling, particularly in the matter of working in the dreaded back story, and avoiding what she calls the expository lump.

The other two are both by Nancy Willard: Telling Time and The Left-Handed Story. Read these for the magic of the creative process. Her insights speak to artists as well as writers.

Hollins has a wonderful program! I highly recommend it!

Once again, you make me wish I had the time and the money to
take the Hollins program. Maybe reading your three suggested titles will help.

This is your cousin Lucy remembering the Birminham summers. Several years ago our crazy cousin Pixie and I went by the house. Before I could stop her, she jumped out of the car went to the door. No one was home, but we came by again and Pix invited ourselves In to see the house. It smelled the same, but had been beautifully updated. Even had a hot tub in what used to be the basement.

Oh my word. A hot tub. I remember that basement. It was where they did laundry and it had that damp basement smell that I always associated with Birmingham because we didn't have a basement in California. I wonder what Maxie would think of a hot tub down there.